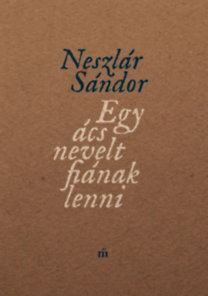 Sándor Neszlár’s book is exciting experimental prose: he writes a sentence for each kilometre he’s run. The novel is a sum of these sentences, brought to life by the runner’s thoughts, now focussed, now wandering freely. The sentences themselves are unusual: they are almost all impersonal, concealing their narrator. A Carpenter’s Stepson is a veiled autobiography that urges the reader, too, to explore the places of their own life, and run through their own sentences.

“It all started with running. I started noting the kilometres and then, after my runs, a sentence or two as well: running into someone while running; running into trouble. When I was nearing my thousandth kilometre, I decided this text would be one thousand sentences, but I ran faster than I wrote, so I had to make that one thousand one hundred and eleven to keep pace with myself. Meanwhile I went years without running, without writing too; later I picked it slowly up again, and as the kilometres piled up once more, the sentences began running out, but by then, that didn’t matter at all.”

53. Leaving blank pages in an unlined notebook. 54. Getting someone else (mum), while driving, to write down the following sentence: to see your favourite film for the first time. 55. Being a lizard on a sunlit rock. 56. During football, as a first year, to interpret literally the phrase: stick to him. 57. Bursting through a wall of linked hands to capture the flag. 58. Saying, look, a wasp, before killing it. 59. Knowing how to make light of grief after a funeral. 60. Driving through the sleeping city at night with your lights on full beam. 61. Deviating from the planned route and then saying:
we’re not lost.